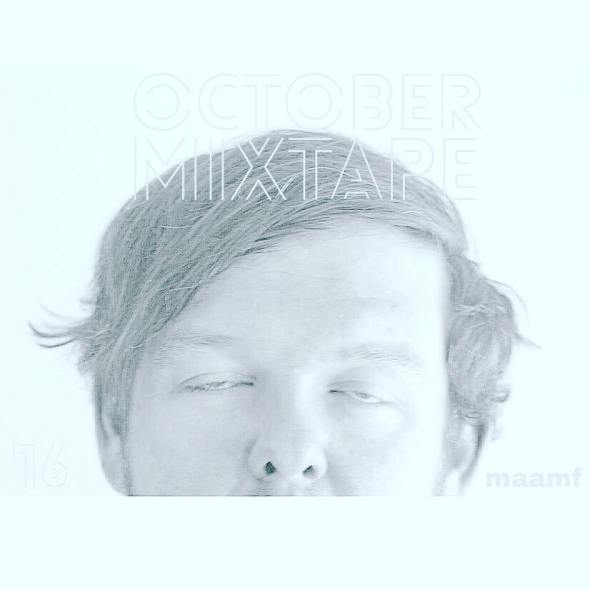 maamf. as it stands: done and dusted. don’t know? keep up.

So this is the last time where this writing, will accompany these songs on this site. I said I wouldn’t go on about it, and I won’t. For too much longer.

Just, really, I just wanted to say the following:

Alright then. No more going on. This is it. My fave selections for October below. Some writing about four of them. Nice tape, as always. A thank you to the artists that helped make it all happen. Full tape at the end.

This track, ‘Be Brave <3’ from The Descenters, a project headed up by Melbourne based Matthew Stoff, throws a distortion fuelled melange of noisey off-cuts at a wall, and what speaks back to them is something tightly wound, cacophonous, but with a therapeutic clarity. Music hey?

There’s quite the comfort in this cover from Melbourne’s Parading. It feels justifiably lazy. Lazy within the confines of a slightly drawn out pop song, but lazy nonetheless. Compared to the original from Paul Kelly, ‘Big Heart’ – taken from the band’s second full length Jungle Songs – proves an obvious, distinctive take. This shows the versatility in song writing on Paul Kelly’s behalf of course – a song that that some 29 years later, feels to have stood the test of time. But positioned within a vastly different musical vibe, the melodic dirge that is shoegaze, Parading give this song a new prolonged life, thanks to the grand vision of this Melbourne four piece.

Perhaps a theme of sorts emerging within these tapes is a vague focus on young musicians emerging away from the main hustle of ‘typical’ music cities like Melbourne or Sydney. Tia Gostelow, an Indigenous woman from Mackay, is 17, a recent finalist in Unearthed High, and writing songs that speak to a potential full blown and successful career in this thing. Capturing that intricate and sophisticated approach to song writing reminiscent of fellow high schooler Gretta Ray, ‘Vague Utopia’ is an incredibly accomplished sounding track.

It feels a little arduous and obvious to draw out the link between Telling and Gotye. The links are there – Tim Shiel, one half of Telling, founded the excellent Spirit Level, which houses this release, with Wally a little while back. There are also quite obvious similarities production wise, however ‘Guessing Games’ tends more towards Tim’s own intricate, electronic canon of work. As a vocalist, Ben Abraham’s voice lends an almost perfect tone to Tim’s production. What sits Telling at the top of the hill is this combination of two, clearly incredible musical minds.

Full tape is here. Just for your ears, your eyes and your little beating hearts.

And finally, to borrow from myself, one last thing:

A thank you and good night to each and every one of you. Wake up tomorrow, attack the day ahead and go to sleep knowing you contributed in a positive way to the life of this guy here, Miks Everitt from Melbourne, Australia.

This entry was posted on November 20, 2016 by miks.. It was filed under Feature, Mixtape and was tagged with Australian music.